Why would Inflation Remain Elevated in the Long Term? The world over has witnessed unprecedented inflation since the recent past, as depicted in the chart below. The Russia-Ukraine war has had a fair contribution to inflationary pressures, which have been omnipresent, but inflation did not commence with the political turmoil. While energy shocks and food prices were the immediate casualties of the war, excessive fiscal stimulus during the pandemic, coupled with huge debt, significantly weakened most economies. An unusual and unexpectedly strong demand was also responsible for the elevated inflation. 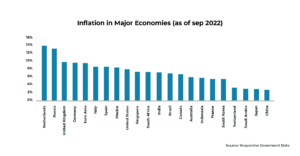 Several governments introduced policy measures to reduce inflationary pressures. This is somewhat proving to be a respite for global inflation. However, we believe the easing is unlikely to occur in the medium term.

We have broadly mentioned plausible factors driving inflation in the medium term.

1. Global trust deficit and shift in manufacturing base
In the last 20 years leading up to the pandemic, prices were generally trending lower as manufacturing hubs in the West shifted to low-cost developing countries in the East, ensuring a continuous supply of cheaper products in global markets. While Russia supplied affordable energy to Europe, China and Vietnam offered economic products to global consumers, thus subduing inflation all along. However, pandemic-induced lockdowns and the Ukrainian war exposed the shortcomings of efficiency-based supply chains.

In response to these limitations, governments increasingly looked at becoming self-sufficient, especially in critical components, and adopted a diversified and resilient production model; thus, costs started escalating. As the world gets further divided into US-led countries and China-Russia bloc, the deepening trust deficit could impose higher restrictions on free movement of goods, thereby expanding inflation.

2. Deglobalization and trade wars
A series of trade wars between the US and China—that were later emulated by most of the other countries—had an adverse impact on globalization. In line with this, prices of goods, including Chinese and other countries’ imports, moved up for consumers in developed markets. Amid rising security concerns and geopolitical tensions, deglobalization pressures have increased drastically in recent times. Consequently, the US and several European countries started using a carrot-and-stick approach with corporates for shifting their production bases and supply chains to home countries or neighboring regions. Therefore, there has been a surge in domestic prices. Although deglobalization is now translating into a de facto policy for several prominent nations, inflationary consequences would lead to sticky prices, going forward.

3. Intense focus on renewable energy
Easy availability of crude oil, at a relatively inexpensive rate, promoted disinflation over the past decade. Nevertheless, with oil being gradually replaced by the more expensive and erratic renewable energy sources, the relationship may not last long. Additionally, dislocations in global supply chains and preference for self-reliant strategies have paved the way for expensive domestic/regional sourcing of renewable energy components vis-à-vis low-cost Chinese alternatives, thereby leading to higher energy costs.

4. Lack of large-scale energy investments
Historically, higher oil prices encouraged greater investments by energy firms, but that relationship seems to have ended in recent times due to intense focus on renewables. Despite the steep rise in oil prices since early 2020, energy companies’ capex has declined sharply. 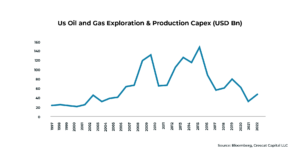 A case in point is the recession of 1974 that reduced inflation to 5%. However, it touched over 10% following its culmination. With the aid of new energy projects, mainly North Sea oil, the Alaskan Pipeline, and Gulf of Mexico offshore oil, inflation was lowered by 1983. In the current scenario as well, we are unlikely to witness another round of low inflation, unless there are massive energy investments that could reduce oil prices, or large-scale renewables come onstream as a replacement for fossil fuels.

5. Aging population
Shifts in demographic patterns across the US, Europe and most other countries (including China) simply indicates these economies have an insufficient labor force for goods production at a cost-effective rate. As per census data, the US population grew just 0.1% last year, the slowest on record. Conversely, population continues to age as there is a decline in fertility rates. By 2034, older adults will outnumber children for the first time in the region’s history. However, in terms of demographics due to immigration policies, the US is relatively better off than other nations. The situation is quite grim across other countries, as illustrated in the chart below. 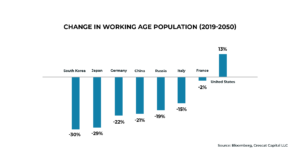 An ageing population will have a negative impact on saving rates, increase real wages, and raise inflationary pressures. Besides, the demographic shift is boosting prices for transportation, manufacturing, and construction industries, among others. As a result, higher inflation will return as the primary challenge for developed and other large markets. Factors such as ageing Chinese population and a change in the country’s economic model—from one of forced savings to one of consumption—will amplify the trend reversal.

Unless governments do not address these structural issues, there is a risk of inflation returning magnified. ONDC: The Next UPI in E-commerce But Needs Time.